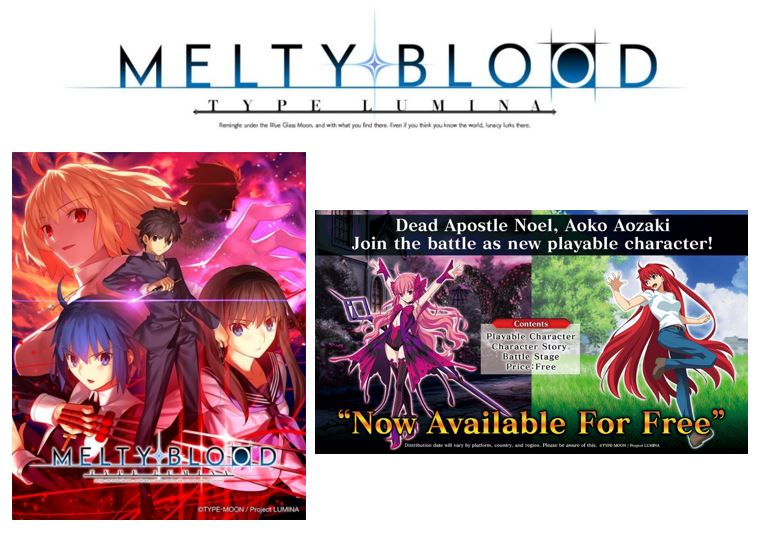 This DLC includes playable characters for “Aoko Aozaki” and “Dead Apostle Noel”, as well as stories for each character and new stages.

*Please check the release date and time for your platform, nation, and region, as some release times may vary.

Players control one of 14+ characters for animated battles against each other. Select characters to use their numerous techniques and experience an individual story for each one. Additional new playable characters are planned for release going forward.

The game has received a strong positive reception from players since launch, receiving nominations in the “Best Fighting” category at The Game Awards 2021.

Price: Free
Available: Please check the release date and time for your platform, nation, and region, as some release times may vary.

Successor to the Fifth Magician, The Magic Gunner

One of only five magicians who exist in the world.
Successor to the Fifth Magician. Overall, she is not considered a skilled magician.
However, when it comes to “destructive” power, she is unrivaled in her talents.
The sight of her raining down bullets like hot geysers has also given her the direct,
yet rather tasteless nickname, “Magic Gunner”.
Who she learned it from is unknown, but she is also familiar with martial arts, and has a battle style that could be considered a hybrid of those martial arts and magic.

She encountered Shiki on her travels. She gave him his glasses that suppress his Mystic Eyes, and taught him the value of living things and how to handle things.
For that reason, Shiki respects her and calls her his teacher.
She’s a difficult person to pin down. She believes in justice, is unreliable, and a vagabond.

A versatile character with set techniques and long-range magical attacks that add pressure. Her mobility and martial arts make her a tricky opponent.

“Aoko Aozaki” excels at a battle style that involves restricting enemy movement with long-range attacks and set projectiles, while punishing foes with both long- and close-range combos whenever they leave an opening. She has a wide variety of techniques at both short and long range, and her tricky versatility makes her an opponent who can hold her own in any situation if played well.

She is also a powerful character in the air, with her high mobility, triple-jumps, and special ability to Aerial Dash twice.

A massive Special that creates a magic circle and fires three shots of a gigantic magical beam. The range is long enough to reach the edge of the screen, allowing players to incorporate it into combos from a variety of other moves, massively increasing damage. It also grants “invincibility”, making it an effective counter when on the defensive.

Restrains the opponent and summons a wave of flowers! An incredible Special that fires magical shots so powerful they are audible, using energy from her magic circuits. This move can only be used at the cost of 4 full Magic Circuit gauges, or will activate under a Blood Heat status after successfully using Shield.

Check out her introductory video for battle animations, Special effects, and fighting styles.

A certain executor who has become a dead apostle.
She now appears as a girl at her most lovely, who has also acquired the Mystic Eyes of Roses
in addition to the abilities of a dead apostle.

She is able to forcefully remove the soul of her target and lock them away in her Mystic Eyes of Roses,
where they experience an unending nightmare. Not only that,
but she is also able to manipulate a large number of spears (bells) in a battle style evocative of a dancing butterfly.

She restrains opponents with projectiles and traps, in a battle style evocative of a dancing butterfly.

“Dead Apostle Noel” is a medium to long-range type character with long reach, a variety of projectiles, and also powerful Set attacks she can use at any time. She excels at a battle style that involves tactical retreats and keeping her distance, while using projectiles and Set techniques to disrupt enemy movements.

An ultra-powerful Special that launches a huge number of spears forward from “Dead Apostle Noel”, impaling and imprisoning opponents.

The rain of spears gives players a chance to really push on the offensive, even if the enemy dodges their first attack. It also grants “invincibility”, making it effective when on the defensive after an enemy closes in.

An incredibly powerful Special that activates her “Mystic Eyes of Roses” to trap enemies in their own nightmares. The move plays out as an illusionist’s show, where she seals her foe in a present and impales them with a spear. This move can only be used at the cost of 4 full Magic Circuit gauges, or will activate under a Blood Heat status after successfully using Shield.

A game update will be released on January 13. The update will include added playable characters for “Aoko Aozaki” and “Dead Apostle Noel”, balance adjustments for all characters, bug fixes, and added features for various modes.

*Some release times may vary depending on your platform, nation, and region.

Available: January 13 (Thu) *Some release times may vary depending on your platform, nation, and region.

Round announcements are downloadable content of announcements in each character’s voice, used in battles and added to the main game upon purchase.

Announcements of battle starts, in-battle announcements, and victory or loss announcements are made in that character’s unique voice. Additionally, announcements also change on the title screen, character select screen, and in modes such as TUTORIAL and MISSION. Get even more enjoyment out of the game with your favorite character’s voice!