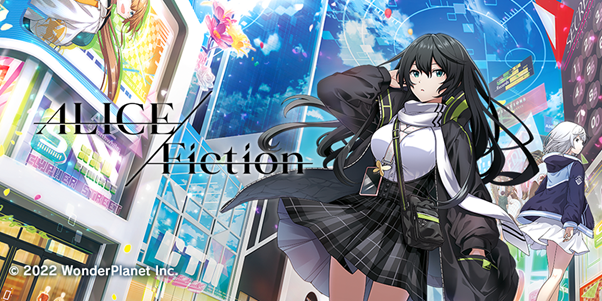 NAGOYA, JAPAN –WonderPlanet Inc., an entertainment service led by Founder and CEO Tomoki Tsunekawa, is going to announce a smartphone game “Alice Fiction” for iOS and Android devices worldwide in the summer of 2022.

The game will be distributed in Japan, English-speaking countries, traditional Chinese, Korea, and other major global regions. Prior to the launch of the official service, a “closed beta test” will soon be conducted for users in English-speaking countries, traditional Chinese, and South Korea, who will be able to experience the world of “Alice Fiction” first hand, and recruitment for the closed beta test participants began today, February 28, 2022.

In addition, we are pleased to announce that we have decided to collaborate with Korean sound producer ESTi for the announcement of this title’s development in the global area. We are planning to collaborate not only with Japanese creators, but also with other popular creators such as illustrators and artists who are active around the world, and we will be preparing a service that can be enjoyed by JRPG fans around the world. Please look forward to further news.

Ahead of the official release of Alice Fiction,  a game for smartphones set in the virtual space [ALICE], we will be conducting a closed beta test for the purpose of verifying game adjustments and server load.

Based on the opinions and impressions received from customers through the closed beta test, we will strive to further improve the quality of the game for the official release.

The official Alice Fiction Discord is now open, with a campaign for participants to win gifts.

The official Discord for  Alice Fiction is now open. Let’s enjoy the world of Alice Fiction with other players who have applied for the closed beta test.

This official Discord server is not only for official announcements and game information, but also to create a place where people can communicate with the management at a close distance so that they can get excited about  Alice Fiction  from the development stage.

Based on the opinions and impressions we have received from our customers through this closed beta test, we will strive to further improve the quality of the game for the official release, and we hope that you will join us in making the “Alice Fiction” community more exciting.

In addition, there is a campaign to win “Airpods Pro” by lottery among those who join the official community of  Alice Fiction  during the period.

The PV currently on view shows a part of the story that unfolds in the virtual space [ALICE], the stage of this work.

The theme song for the game is “Un-Reality Escape” by FantasticYouth. Please take a look at the PV along with the lyrics that link to the stage of the virtual space [ALICE].

This world is full of so many things that are truly unreal
Everyday reality just isn’t real… A first and final vacant space
No fear of failure, you can always hit Ctrl-Z in a pinch
The cables that connect everything are severed, and we’re better off that way

However, one day we’ll realize
That nothing will come out of this world
A meaningless world that spirals on into an endless and eternal paradise
Going out in search of meaning isn’t always the right course of action
But there’s definitely possibility there
Stand… walk… run… take flight!

Formed in 2017.
FantasticYouth is a two-piece music unit consisting of Onyu, a vocalist with overwhelming singing ability, and LowFat, a composer, rapper, and vocalist.

The unit’s first video has become a hit with over 10 million views and has been ranked in the top 100 in the entertainment category on the video sharing site “Nico Nico Douga” for 50 consecutive weeks. The total number of views on the video posting site is over 80 million.

FantasticYouth Onyu comment:
We are very honored to have our song used in this project.
I can’t wait to see how “unrealistic escapism” will blend in and mix with “Alice Fiction”. I’m looking forward to playing this game!
I hope that the world of “Alice Fiction” will reach and be enjoyed by many people.

For the global launch of “Alice Fiction”, we have decided to collaborate with a Korean sound producer, ESTi.

We are planning to create a cover song of the popular Japanese music unit FantasticYouth’s “Un-Reality Escape”, which will be played in the teaser PV of “Alice Fiction”.

We plan to collaborate with not only Japanese creators, but also popular illustrators and artists from around the world to create a service that can be enjoyed by JRPG fans around the world. Please look forward to further news.

Composer, Sound Producer
Contributed music mainly for game titles such as “DJMAX”, “Destiny Child”, “The Idolmaster Cinderella Girls”, “Ragnarok Online”, and “Tales Weaver”. In recent years, as a K-POP producer, he produced “YUKIKA – SOUL LADY”, which was ranked in “Billboard Best K-POP Album of the Year”, and has been developing his global music activities.

ESTI Comment:
I am very happy to be able to greet you all through “Alice Fiction”.
Furthermore, I am very excited to work on retouching “Un-Reality Escape”, one of the most popular songs of the popular Japanese music unit FantasticYouth, for global development.
Please look forward to the new version of “Un-Reality Escape,” which has been newly analyzed and emotionally reborn by ESTi.