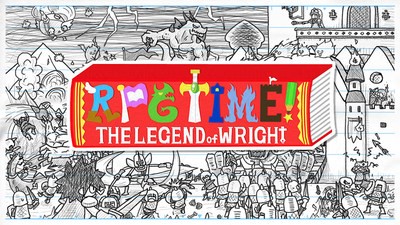 Aniplex Inc. today announced that handmade notebook adventure RPG Time: The Legend of Wright is now available on the Nintendo Switch™ and PlayStation®4. The title is also currently available on Xbox Series X|S, Xbox One and Windows platforms, and will further be coming to Steam® on September 13.

RPG Time: The Legend of Wright, which retails for $29.99 USD, features a unique, hand-drawn art style that replicates aspiring game creator Kenta doodling his own imaginatively nostalgic RPG adventure in a physical notebook, aptly titled “The Legend of Wright.” While the game’s title contains the term “RPG,” players will be able to experience mini-gameplay from a variety of different genres inside a world made from cardboard and stationery strewn across a desk, including action, adventure, side-scrolling shooters and command battle games.

Over the course of its 10 years of development and 16 years of conception, RPG Time: The Legend of Wright’s uniquely creative presentation and imaginative vision has earned the two-person DeskWorks team awards and recognition at numerous trade shows around the world, including Tokyo Game Show, Taipei Game Show, BitSummit and IndieCade.

Assets for RPG Time: The Legend of Wright, including both screenshots and gameplay clips, can be downloaded via Dropbox [HERE].

RPG Time: The Legend of Wright is available now for Nintendo Switch, PlayStation 4, Xbox Series X|S, Xbox One and Windows for $29.99 USD, and will launch on Steam September 13. For more information, please visit the official website at https://rpgtime-en.com/ or join the conversation on Twitter at https://twitter.com/RPGTimeEN.