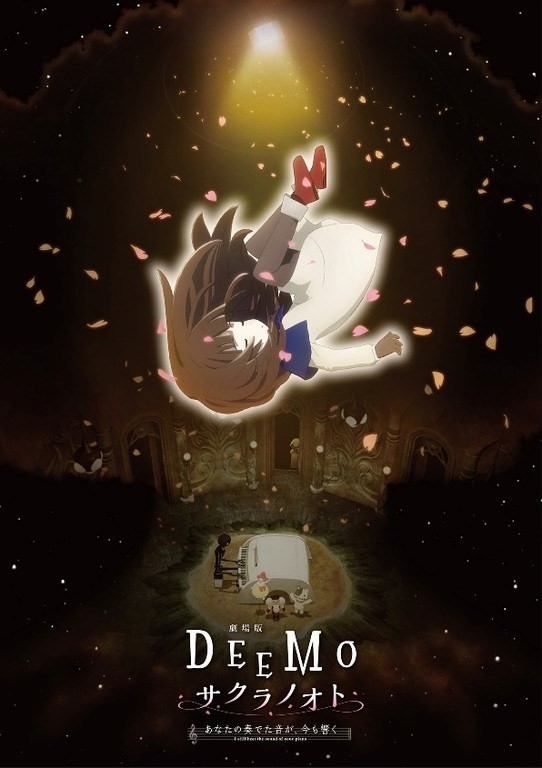 TOKYO, March 29, 2021 — Pony Canyon Inc. (Head Office: Minato-ku, Tokyo; President: Takashi Yoshimura) announced on the presentation stage at AnimeJapan 2021, which was broadcast online on Sunday, March 28, that Akari Nibu of the Japanese idol group Hinatazaka46 has been cast as a voice actress for the upcoming theatrical animation “DEEMO THE MOVIE”. On the same stage, the official Japanese title was also revealed. This will be Akari Nibu’s first attempt at voice acting in an animated movie.

The presentation stage was hosted by Nippon Broadcasting System announcer Naoki Yoshida, and featured Ayana Taketatsu (who will play the role of the lead girl Alice) and the film’s general director Junichi Fujisaku. The event was filled with a lot of excitement, as the main characters’ model sheets and a special video were shown for the first time.

Akari Nibu was chosen to play the role of the mysterious “Masked Lady” who holds the key to the story. Surprised fans congratulated Nibu once the casting was announced as she had been mentioning her desire to give voice acting a try. Congratulatory comments quickly filled up social media.

“I was really happy from the bottom of my heart when I first received this offer. The Masked Lady is a mysterious being, but I’m also told by my fellow idol group members to be “mysterious” so it’s something we have in common,” said Nibu, as she explained her joy of participating in the movie and the film’s highlights via video comment.

Fujisaku, who witnessed her performance on the spot, praised her as “Prior to the voice recording, I was thrilled about how everything was going, but Nibu’s vocal delivery was astonishing and her acting abilities were beyond my imagination. I thought I would treat her on an equal footing with a voice actress. On the contrary, I raised further requests, and she delivered on all of them.” Ayana Taketatsu, on the other hand, also said, “She is so cute and makes people’s hearts melt.” and expressed her joy of working with Akari Nibu, despite not having met her yet as the postrecording process for anime has changed in response to the coronavirus situation.

The special video that followed next depicted the characters moving adorably using advanced 3D modeling and displayed the fantastic world of DEEMO against a beautiful piano melody, raising expectations for the completion of the movie. This video was simultaneously released on Pony Canyon’s official YouTube channel.

At the end of the event, Fujisaku explained the appeal of the film as “The team are really working hard on this title. It will be a gentle and musical movie that will touch all of your hearts. Now we are closer to the completion of this movie. DEEMO leapt out from the gaming category and became a movie, so I am really happy as a game fan to be involved in the DEEMO film project. For fans of the original game, popular songs colourize the story. I think they will enjoy this movie very much. Many things are not be able to be revealed at present, but please look forward to further announcements,” said Ayana Taketatsu of her high hopes towards the theatrical release of the film.

This theatrical anime is based on “DEEMO”, a highly popular game series that has amassed over 28 million downloads worldwide (as of Jan 2021). The anime will jointly be produced by Pony Canyon and Production I.G Group, the same group that made “Attack on Titan” a global hit.

In addition, the theme song and image song will be written by Yuki Kajiura, who has handled music for many anime titles such as ‘Fate/Zero’ and ‘Demon Slayer: Kimetsu no Yaiba’.

Deemo, a mysterious lonely character that plays the piano in a castle. One day, a girl who has lost her memory comes falling from the sky. A gentle, ephemeral story of love spun by Deemo, the girl, the mystical residents of the castle, and a tree that grows with the sound of the piano.

“The 8th SON? ARE YOU KIDDING ME?” Returns as mobile game
“MELTY BLOOD”, the 2D fighting game that takes place in the world of “Tsukihime” has been reborn and will be released in 2021