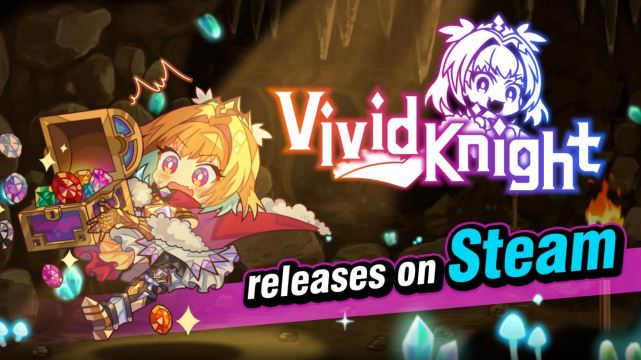 Party-building Roguelike Game “Vivid Knight”
The first title created for Steam by Asobism, developer and provider of popular smartphone games “Castle & Dragon” and “Dragon Poker.” The key to this roguelike game is to find the knights who have been trapped inside jewels by the Black Witch, then add them to your party to harness all their skills, so you can be ready to fight back.

A small kingdom surrounded by a beautiful land. The main character, Amelie, is a highly-spirited princess who sneaks out of the castle every day to visit the White Manor, where she immerses herself in the study of jewel sorcery.
One day, Amelie returns to the castle as usual to discover that all the people in the kingdom have been turned into jewels and taken by the Black Witch.Amelie descends into the underground labyrinth, where the witch and her monsters lie in wait. Will she be able to rescue the king and the people of the kingdom?

Crystal Princess Amelie
The main character, a rambunctious princess.
She used to sneak out of the castle every day and go to the White Manor to play.
One day, she sensed something wasn’t right in the kingdom, and returned to find the Black Witch had turned the people into jewels.
To save the king and her people, she journeys into the labyrinth.

White Witch Zeola
A beautiful witch living in the White Manor near the kingdom.
Upon becoming aware that the people of the kingdom have been turned into jewels, she journeys into the labyrinth to help her sister.

Gameplay
“Vivid Knight” is a strategy game in which you explore randomly-generated dungeons, aiming to defeat the bosses lurking on the lower floors. As you go through your journey, meet knights who have been turned into jewels, add them to your party and harness all their skills to win battles. Party building is the key of the game! Create the strongest party possible!

Party Building
As you go through your journey, meet knights who have been turned into jewels, add them to your party and harness all their skills to win battles. Party building is the key of the game! A unit is a jewel, each one with its own color and symbol. Create a party with up to six units. Match units with the same color or symbol to activate the symbols’ powers. The more symbols of a similar type you collect, the more powerful you become!

・Collect jewels of the same color to activate their power!

-Burn (Red): inflicts fixed amount of damage for each action

・Collect the same symbols to activate their power!

Unit Upgrade
Upgrade units by collecting a certain number of the same units. An upgraded unit not only has a better status, but it is also able to activate its powers even from outside the party! This increases the reach of your party’s power even more!

Units and Monsters
Let’s introduce the units that have been turned into jewels, each with their own personality, as well as the monsters from the dungeon!

・Knight Heliodor
A young newcomer knight.
What he lacks in competence he makes up for in enthusiasm.

・Knight Bruce
A young newcomer knight.
As the most responsible among his peers, the other fledgling knights look up to him.

・Knight Garnet
A young newcomer knight.
She’s typically chill and laid-back, but when it’s time to fight she runs rings around the enemy.

Launching also the Bundle Version with Soundtrack!
In addition to Regular Edition ($14.99) launched on Steam today, May 26th (PST), the company is launching the bundle version with soundtrack ($21.98), containing a total of 31 background music tracks from “Vivid Knight.” The soundtracks were composed by Kohei Matsuoka and Ryosuke Kojima, the sound creators of a number of the background music tracks from the smartphone games “Castle & Dragon” and “Dragon Poker.” We hope you will enjoy these new tracks that bring life to the world of “Vivid Knight”!

Promotional Video
Take a look at the dungeon battles, with Crystal Princess Amelie and her allies using jewel sorcery to fight against their enemies.