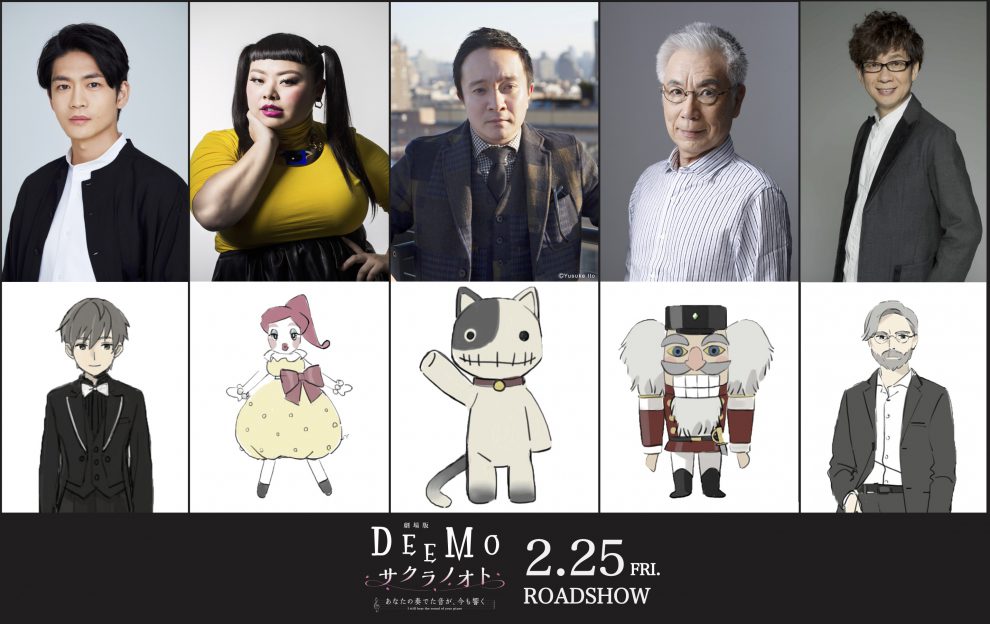 TOKYO, Oct. 22, 2021 — PONY CANYON announced today that the domestic theatrical release date for the animated film “DEEMO Memorial Keys” has been set for February 25, 2022 (JST) in Japan and that Gaku Hamada, Naomi Watanabe, Issey Ogata, Kohei Matsushita, and Koichi Yamadera have joined as the new dub cast of the film.

The anime will also have its world premiere as a feature competition film at the 23rd Bucheon International Animation Film Festival on October 22.

First-Rate Dub Cast Come Together for DEEMO THE MOVIE

A newly announced dub cast, Gaku Hamada, plays Mirai, a stuffed cat who lives in a mysterious castle where Alice (Ayana Taketatsu) falls from the sky. Mirai is the leader of the three dolls that surround Alice, along with Nutcracker and Fragrant Sachet. The Nutcracker, played by Issey Ogata, is a slow-paced doll with an old man’s air about him, always making the place go blank with his silly jokes. Naomi Watanabe plays the role of “Fragrant Sachet”, the calmest and most fashionable of the three dolls, who floats in the air with an impressive appearance. Hamada, Issei and Watanabe play three dolls with rich emotions, who are close to Alice’s anxious heart after losing her memories of the past. Kohei Matsushita, who was playing the piano during the dubbing session, plays Hans, a genius pianist who lost his parents and is under the care of his aunt with his young sister. Koichi Yamadera plays Professor Valensky, Alice’s piano teacher, and adds a unique depth to the work.

Comments from the Cast

GAKU HAMADA as Mirai: Mirai has cute looks but has a bad mouth and is always poking at the other characters, so I made sure to give myself an important role. The dubbing was done while everyone else had already recorded their lines, so it was easy to do. Everyone’s voices helped me to relax and pushed me forward just like Alice in the movie. This is a work made by Japanese professionals. I did my best to create my own version of Mirai. I hope you enjoy it.

ISSEY OGATA as Nutcracker: I think this work is a story about the heart. It is a film that allows you to look inside your mind, stop and have a conversation with yourself. I think this is a film that allows you to do that. A new DEEMO will be born, this is DEEMO! I hope everyone will take the time to have a conversation with their heart at the theater.

NAOMI WATANABE as Fragrant Sachet: It was a role I had never played before, so it took me a while to get into the role of the scent bag. Her every word seemed to unravel the story of the film, and I was so nervous that my voice was sometimes slurred. I wanted to use a gentle voice, so it was difficult to find the right balance. The real world is so harsh these days that I tend to watch movies with a lot of thoughts in my mind, but DEEMO is an animation that I can fully immerse myself in. I want people who don’t play music games or who have never heard of DEEMO to see it. It’s a work that reminds me of emotions I’ve forgotten as I’ve grown up.

KOHEI MATSUSHITA as Hans: It was my first experience with dubbing, so I was very nervous, but the director gave me detailed instructions that made it easy for me to play and learn. I think this film will be a wonderful entertainment film filled with elements of music, movies, and games. I think this film has a lot of possibilities, and I hope that DEEMO will inspire people to dive into the world of music as well as the world of anime.

Distinguished Creators Have Gathered for DEEMO THE MOVIE

Junichi Fujisaku of “Ghost in the Shell: Stand Alone Complex” (screenplay) and “BLOOD+” (director and series composition) serves as the general director, and up-and-coming director Shuhei Matsushita is appointed as the director. SIGNAL.MD (“Hirune Hime: Shiranai Watashi no Monogatari”, “Cyborg 009: CALL OF JUSTICE”), which continues to grow as one of the leading IG Port companies, and Production I.G, one of Japan’s leading studios (“Ghost in the Shell” series, etc.), are jointly in charge of anime production. The character design is by Mebachi, a popular illustrator of “Mitsuboshi Colors” and “Shoujo☆Kyogen Revue Starlight”. The theme and image songs are composed and produced by Yuki Kajiura, who has worked on such popular works as “Demon Slayer: Kimetsu no Yaiba”, “Sword Art Online” series, “Puella Magi Madoka Magica”, and “Fate/Zero”. The theme song is sung by the promising newcomer, Hinano Takashima, who won the grand prix in the “Utahime Audition” for this work.

About the Original Game “DEEMO”

The anime is based on the popular music rhythm game “DEEMO”, which has been downloaded over 28 million times worldwide. One day, a little girl swoops down from the sky in front of Deemo, a mysterious piano-playing creature, who uses the sound of his piano to make a tree grow toward the sky so that the girl can climb up the tree and return to the world she used to live in…

The game, which uses the piano as the core of its story, was a huge hit in Asia and other countries, attracting music game fans from all over the world with its wide range of high-quality original music, including classical, jazz, and rock, and its meticulously calculated rhythms and melodies, which gave players an overwhelming sense of live performance that immersed them in the game.

Resident Evil Village Wins Ultimate Game of the Year, Capcom Awarded Studio of the Year at the Golden Joystick Awards 2021!
[Art Platform Japan Symposium]  The Globalization of the Art World and “Japan”: What lies ahead for the advancement of contemporary art Saturday, October 23, 2021, 2pm–4pm (JST)