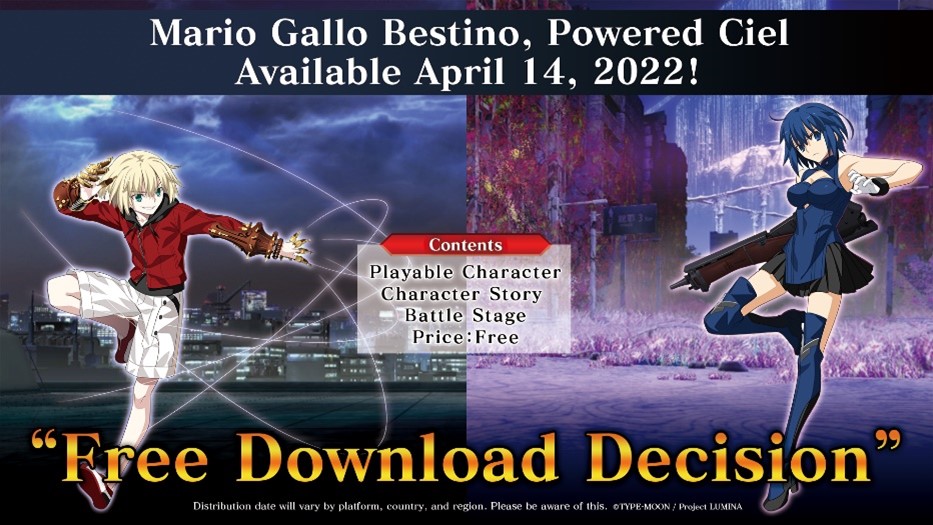 This DLC includes playable characters for “Powered Ciel” and “Mario Gallo Bestino”, as well as stories for each character and new stages.

Players control one of 15+ characters for animated battles against each other. Select characters to use their numerous techniques and experience an individual story for each one.

Be sure to stick around for more updates!

The game has received a strong positive reception, including a nomination in the “Best Fighting” category at The Game Awards 2021, as well finalist standing in the “Fighting Game of the Year” category at the 25th D.I.C.E. Awards.

The DLC featuring “Powered Ciel” and “Mario” will be available starting April 14 (Thu), 2022. Please make sure of the time in your timezone, based on the region you live in.

Balance adjustments for all characters and partial battle system adjustments are scheduled for the game update on April 14 (Thu). We will share details on the official website and Twitter at a later date.

Simultaneous release in all regions and for all platforms, including PlayStation®4, Nintendo Switch™, Xbox One, and Steam.

Please make sure of the time in your timezone, based on the region you live in.

Check out her introductory video for battle animations, Special effects, and fighting styles.

The embodiment of the true nature of the Burial Agency; a demon-killing executioner

Ciel, outfitted to face the twenty-seven Dead Apostles and enemies in the same class, using the conceptual weapon “Seventh Holy Scripture” broken down into individual causes of death.

She makes constant use of the “Seventh Holy Scripture,” a millennium-class holy relic.
While it drains an enormous amount of magical energy, it is a viable battle style for Ciel, who has the magical power of a hundred magi.

Her main attacks often use weaponry, in the style of “Blaze,” “Blade,” and “Break,” and her heavy armament features both brute force and magical enhancements.

Perhaps due to her specialization in destroying heretics, she is even more cold and unforgiving than usual.

Battle Characteristics
A high-power type that muscles through fights with Super Armor and unguardable attacks, all while dominating foes with varied weaponry

“Powered Ciel” is a new playable character with entirely separate techniques from “Ciel”, as well as a distinct appearance. “Powered Ciel” returns with next-generation animation!
“Powered Ciel” is a high-power type who excels at aggressively pursuing enemies while keeping opponents under pressure with magical lighting attacks, as well as a gun, blade, and pile-driver from the “Seventh Holy Scripture”.
She can switch between the gun, blade, and pile-driver weapons on the fly, producing varied attack combos.
“Powered Ciel” is excellent at a battle style that powers through to victory, using long-range unguardable attacks and attacks with Super Armor alongside varied attacks using the “Seventh Holy Scripture”.

▲ Arc Drive: Seventh Holy Scripture – Four Causes Pilgrimage
This massive Special hits enemies with four separate causes of death, shifting through the elements of the “Seventh Holy Scripture” in sequence. This Special hits at close range, meaning its damage increases massively when used in a combo with gap-closing techniques. It also grants “invincibility” and allows you to ignore enemy attacks when activated, making it an effective counter when on the defensive.

An absolutely overwhelming Special that strikes down enemies with Ciel’s ultimate magical technique. Note the fluid animation as “Powered Ciel” moves after activation, and the dynamic effects. Each enemy even has a personal reaction when the attack hits them! This move can only be used at the cost of 4 full Magic Circuit gauges, or will activate under a Blood Heat status after successfully using Shield. Use a Forced Release and turn the tables when an enemy closes the gap with you, or when your life runs low!

Check out his introductory video for battle animations, Special effects, and fighting styles.

A young Acting Prelate of the Holy Church, also known as “the Puppeteer”

An Acting Prelate of the Holy Church.
A pretty boy with blonde hair and fair skin, Mario tends to dress casually. Although he may not appear so, he holds a position of great responsibility while still in his early teens.

He detests the inept and indolent, and often lashes out verbally, but he is also a compassionate, dutiful person at his core.
His talents in assessing character and abilities, his skillful balancing of hard and soft power, his leadership and ability to use resources to control the game, and his fighting style using a Piano Machine to control nuns like marionettes, have all earned him the nickname “Mario the Puppeteer.”

Battle Characteristics
A technical, speedy character that dominates the field controlling a massive number of Sisters

“Mario” primarily fights by using his “Piano Machine” to control Sisters for offense, alongside his own agility. He excels in medium- to long-range battles, slipping by enemy attacks while using a crowd of Sisters to deliver one-sided beatings to his foes.

Sister attacks can involve the Sisters that stay near “Mario” performing attack moves, or attacks that call various Sisters in from off screen. Playing as “Mario” requires you to choose the optimal attack for the situation, but command inputs for the character are generally just as simple and approachable as for other characters.

An extremely powerful Special that takes control of “Noel” to attack enemies. Watch for Noel’s humorous expressions, movements, and spoken lines when the “Piano Machine” takes control! In performance terms, its long reach allows players to incorporate it into combos easily, or use it to finish combos and boost their damage. It also grants invincibility, making it an effective counter when on the defensive and in trouble.

This massive Special takes control of a mob of Sisters to attack enemies one after the other in a combo. Watch for the variety of attacks launched by the numerous Sisters, as well as Mario’s smooth animations and audacious smirk.

This move can only be used at the cost of 4 full Magic Circuit gauges, or will activate under a Blood Heat status after successfully using Shield. Use a Forced Release and try for this Special when you want to get some distance from your enemy, or when your life is running low!

The second DLC adds two new stages, “Battle at the Threshold” and “Actions in the Lower World”.

There is also excellent new stage music for each stage!

The update scheduled for April 14 (Thu), 2022 also includes 5 color variations and 5 color palettes for all characters! Access them from “Color Customize” mode to change your character’s colors during battles.

“Powered Ciel” and “Mario” round announcements will be available starting April 14*!

Round announcements are downloadable content of announcements in each character’s voice, used in battles and added to the main game upon purchase.

Announcements of battle starts, in-battle announcements, and victory or loss announcements are made in that character’s unique voice. Additionally, announcements also change on the title screen, character select screen, and in modes such as TUTORIAL and MISSION. Get even more enjoyment out of the game with your favorite character’s voice!

*Please make sure of the time in your timezone, based on the region you live in.

Simultaneous release in all regions and for all platforms, including PlayStation®4, Nintendo Switch™, Xbox One, and Steam.

Please make sure of the time in your timezone, based on the region you live in.

We are currently planning a “MELTY BLOOD: TYPE LUMINA” open tournament in the North American region!

*Cross-platform battles are not supported