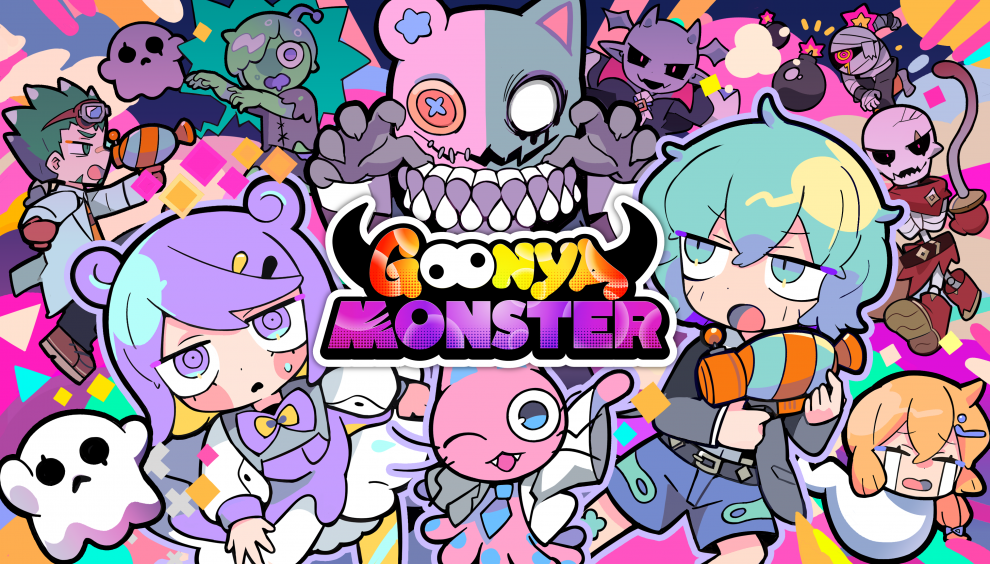 Go on a rampage in a 3 Vs 1 asymmetric battle with characters packed with cuteness and punk attitudes, designed by the famous artist, Terada Tera!

MUTAN Inc. is set to release the Party Action Game GOONYA MONSTER in 2022 World-wide on STEAM. The following 4 languages are planned to be supported: English, Japanese, Chinese (Cantonese / Mandarin).

GOONYA MONSTER is a 3 Vs 1 asymmetric PvP game, where 3 “Busters” face off against 1 “Monster”, with players controlling characters designed by the famous artist, Terada Tera.

Busters can use a unique cast of weapons, while Monsters can unleash powerful Skills to help achieve their respective win conditions.

Earn points by playing through matches and enjoy customizing your favorite characters to your liking.

Get a first look at actual gameplay footage in the teaser trailer now available in the link below.

Check out the characters designed by Terada Tera move around.

Wishlist Now on the Steam Store

Steam Store page now available. Add it to your Wishlist to get the latest information regarding the games release.

Buster: Master a diverse set of weapons and carry a fixed amount of Souls to the goal!

3 Players are Busters. Lasers, Shotguns, Flamethrowers are some of the weapons you can master to help you fight alongside other players.

Busters win by successfully carrying a fixed amount of “Souls” over to the goal. Defeat Undead enemies that spawn throughout the stage and pick up their “Souls”.

Monster: Send those pesky Busters flying with your extravagant Skills!

1 Player is a Monster. Prey on an enemy until they die using the special technique “Predation”. Utilise a “Skill” unique to that Monster to fight against the Busters.

The Monster wins by taking down all the Busters, or by reaching the match time limit.

Get adventurous with customizing your favorite character

Each of these cute characters designed by Terada Tera can be customized. Play the game to earn points and get unique skins to dress-up your character. You can also equip “Gear” to enhance your character’s abilities.

Earn points by facing off against others in Episode matches

You can get the points needed for customizing your character from Episode matches. Let the battle unfold between you and your friends, or players from across the world! Also, be sure to experience the story that unfolds over time and stages that change periodically. When there aren’t enough players to find a match, the CPU will always be there to join, keeping the queue times low.

An incredible cast of Voice Actors known across multiple hit media titles are here to voice the characters designed by Terada Tera. Not only can you set the match voice-over, but you can also set the Menu and System voice-over as well. Stay tuned for even more Voice options in the future.

An avid cat lover. Gets hyped up when it comes to cats.

He was drawn to the cat-like appearance of Goonyan and decided to join the fight.

A 10-year old girl that goes about life at her own pace.

Her moral compass is slightly off, with no hesitation when it comes to unloading her weapon.

She took up Goonyan’s offer of becoming a Buster for the simple reason of wanting to fight.

She’s always the top of her class in school and athletic to boot.

She’s from a well-established family but that doesn’t stop her from feeding her darkest secret; spending all her money shopping and pulling on gacha.

She’s in it for the money.

A sloppy 28-year old scientist. The thing he hates the most is himself.

He’s knowledgeable when it comes to weapons. Capable of maintaining and modifying the weapons.

He holds himself responsible for the group and felt as though he had no other choice but to fight with them.

A friendly and mysterious half-baked Monster. It has the head of a cat but its limbs are tentacles.

Persuaded Octo and the others into fighting by giving them all weapons.

Goes berserk and feasts on the Buster in an instance!

Throws a bomb that explodes when it hits a Buster or the surrounding terrain!

Flies high into the sky using a balloon and rains explosives from above!

There’s plenty of other Monsters to choose from! Play to find out for yourself !