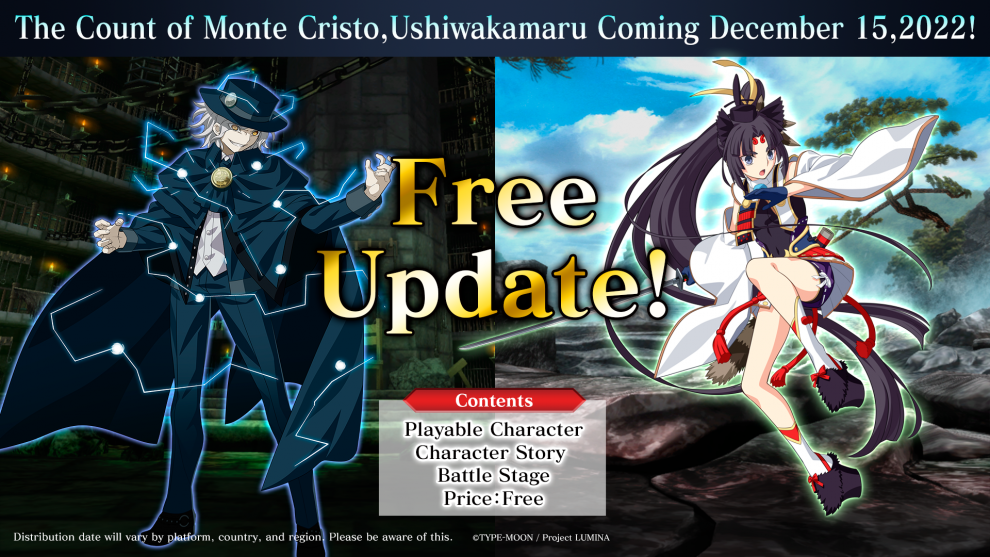 In addition, the large-scale update on the same day will add Spanish, French, and Brazilian Portuguese language versions of the game*2.

*2The language updates will be in text only, the audio will be in Japanese.

Players control one of 20 characters for animated battles against each other. Select characters to use their numerous techniques and experience an individual story for each one.

Look forward to the update on December 15!

The game has received a strong positive reception, including a nomination in the “Best Fighting” category at The Game Awards 2021, as well finalist standing in the “Fighting Game of the Year” category at the 25th D.I.C.E. Awards.

MELTY BLOOD: TYPE LUMINA incorporates systems that allow even new fighting game players to enjoy stylish battles right from the start. It does this using the “Rapid Beat” combo technique to produce moves from button mashing, as well as other systems like “Moon Skills” that deliver enhanced special moves with simple commands.

It also retains the “Shield” techniques to block enemy attacks, aerial battles, and other traditional features familiar to fans of the “MELTY BLOOD” series. Plus new systems and characters create all-new dynamics and skills to perfect, for a fresh approach to enjoying “MELTY BLOOD”!

New playable characters “The Count of Monte Cristo” and “Ushiwakamaru” available in a free update on December 15.

New playable characters “The Count of Monte Cristo” and “Ushiwakamaru” will be available in a free update on December 15 at 5:00(UTC), 2022*.

New character stories and battle stages will also be added alongside the playable characters.

“The Count of Monte Cristo” and “Ushiwakamaru” are characters who appeared in the smartphone game “Fate/Grand Order”. Now these characters are making their first appearance in “MELTY BLOOD: TYPE LUMINA”!

Currently “MELTY BLOOD: TYPE LUMINA” is available in five languages, Japanese, English, Chinese (Traditional and Simplified), and Korean. After the December 15 update, this will grow to a total of eight languages.

We hope this will allow even more players around the world to enjoy “MELTY BLOOD: TYPE LUMINA”!

*2The language updates will be in text only, the audio will be in Japanese.

The Count of Monte Cristo

The Eternal Spirit of Vengeance, from the edge of love and hate

His battle style branches into a variety of attacks that put pressure on opponents with a powerful rush that leaves no room for escape.

“The Count of Monte Cristo” has many moves with both broad and long ranges. This character excels at battle tactics that rush in to attack when an opponent is trapped, putting him at the advantage.

“The Count of Monte Cristo” also possesses well-balanced offensive and defensive skills. He uses command throws and overhead and low attacks that branch into a variety of attacks to put pressure on opponents, strategically and tactically backing them into a corner. In addition, many of his normal skills also work excellently as placement skills and are powerful when used aggressively.

Use preemptive strikes that create chances for yourself, and wear down your opponents before moving in for the attack!

Charismatic and a flawless beauty, Ushiwakamaru runs free in the city of the future

A speedy fighter who races freely across the field to take opponents by surprise.

“Ushiwakamaru” has a battle style that is speedy and allows her to run freely around the field to take opponents by surprise, moving in quickly from the ground or the air to toss them around.

She has many moves that allow her to instantly close gaps, and she is able to employ a variety of movements in the air. She is also very adept at breaking through opponents’ guarding with overhead, low attacks, and tricky movements. Her battle style is also great at taking advantage of gaps in her opponents’ defense to quickly and decisively strike them down.

Control the pace of the battle with her highly mobile hit-and-run style and use the whole field to launch an attack!

New stages will also be added to go along with the release of “The Count of Monte Cristo” and “Ushiwakamaru”.

*Cross-platform battles are not supported

*Spanish, French, and Brazilian Portuguese support is planned for release on December 15, 2022.

Koi-Koi VR: Love Blossoms is now 30% OFF in the Steam Winter Sale
Presenting a new trailer for Palworld, and revealing many new mysterious “Pal”! Do “Legendary Pal” exist?