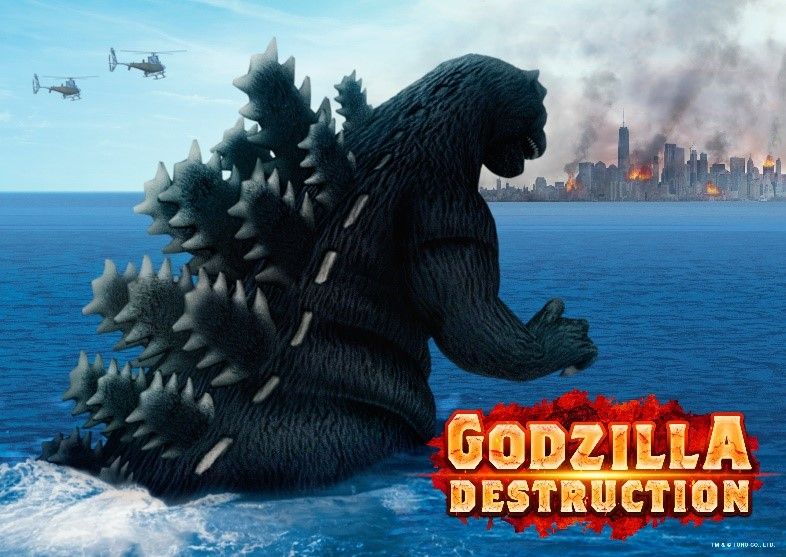 “Godzilla Destruction” is an exciting and easy to play mobile game where players become the King of the Monsters himself and embark on a global rampage. Players control Godzilla with the tap of a finger to crush historical buildings in cities across the globe.

In the new promotional video, Godzilla can be seen using his humongous body and devastating Heat Ray to topple major buildings around the world like toy blocks. This video gives fans a taste of the exhilarating action they can expect in “Godzilla Destruction”. Meanwhile, the key art (below) features the colossal Godzilla crossing the ocean as he advances toward a burning city shrouded in smoke. This powerful image depicts the heart-pounding moment the King of the Monsters makes his almighty presence known to the trembling human world.

Pre-registration
To pre-register, do any of the following:

All kinds of new gifts will be given away every week through social media.
Don’t forget to register to receive these limited edition gifts!

Godzilla Destruction
Become Godzilla and crush cities underfoot!Step inside the monstrous body of the legendary Godzilla and terrorize all corners of the world!
Destroy cities across the globe in this exciting and easy to play game!

▼Become the King of Destruction   ▼Take on powerful bosses!
with the tap of a finger!

About TOHO
Toho Company, Limited, is a Japanese entertainment studio focused on the development, production,exhibition, and distribution of powerful live action and animated content including motion pictures, television and theater. Founded in 1932, Toho remains a prominent force in bringing brands and original storytelling with versatile talents to audiences worldwide. Its subsidiaries include Toho Cinemas, the highest grossing exhibition company in Japan, and Toho International, Inc., a U.S. established incorporated company that manages and commercializes Toho’s intellectual property portfolio.  To learn more about Toho, visit: www.toho.co.jp/en/ .