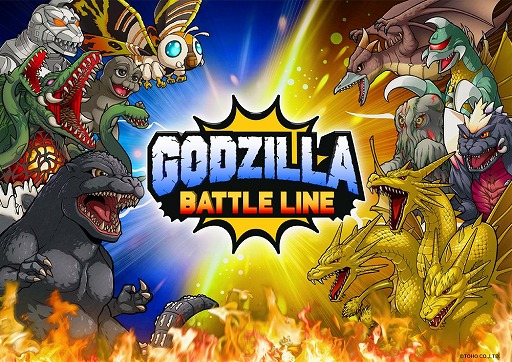 April 16, 2021 (Tokyo, Japan) – TOHO Games, the game label of Toho Co., Ltd. today released a key visual and the latest promo video for its upcoming mobile game “Godzilla Battle Line” ahead of its global debut in May. The announcement follows the release of key art and promo video for “Godzilla Destruction” earlier this week, one of three Godzilla Games for mobile worldwide that are releasing year, the first of which, “Run Godzilla,” is already available on mobile worldwide.

In “Godzilla Battle Line”, all the legendary monsters and weapons from the Godzilla series are ready for an epic fight. Players can build their own team of the strongest monsters and compete in exciting 3-minute battles against players from all over the world in real time.

The game’s key visual features some of the most beloved monsters featured over the course of the Godzilla series’ more than 65-year history, including Godzilla himself, King Ghidorah, Biollante, Rodan, Mechagodzilla, and Mothra.

Alongside this visual, a promo video featuring the latest gameplay footage has been released. The video is packed with unique and thrilling elements found in the game, from fierce battle scenes of the monsters clashing, to special moves, like Godzilla’s Heat Ray, that can turn the tide of battle in an instant.

Godzilla’s path of destruction is set to expand even further alongside the release of the Hollywood movie “Godzilla vs. Kong” (in US theaters and on HBO MAX on March 31, and in Japanese theaters on May 14) and the anime TV series “Godzilla Singular Point”.

The pre-registration campaign for the mobile game “Godzilla Battle Line” is also open. The game is set to be released in some countries in April 2021, and worldwide (including Japan) in May.

All the popular monsters and weapons from the Godzilla series are ready for battle! Build your own team of the strongest monsters and fight against players from all over the world in real time! Get ready for fun but intense 3 minute battles!