Mystery with my Friend, a visual novel game originally launched in Japan and the #1 title of its genre in the Japan app store, is now available for iOS and Android. The game comes at a time where diversity and inclusivity are increasingly becoming more important, especially in games where LGBTQ characters and themes are often limited. The visual novel is intended for contemporary people in a dramatically changing world and places an emphasis on diversity and inclusivity as various LGBTQ characters and their stories are depicted in-game.

As the main character of the visual novel app, you can read a story about a gay detective who works as a tailor and how he solves the little mysteries of everyday life. There are also characters with various gender identities in the stories, including the tailor detective’s ex-boyfriend, a lesbian girl, and a non-binary individual. 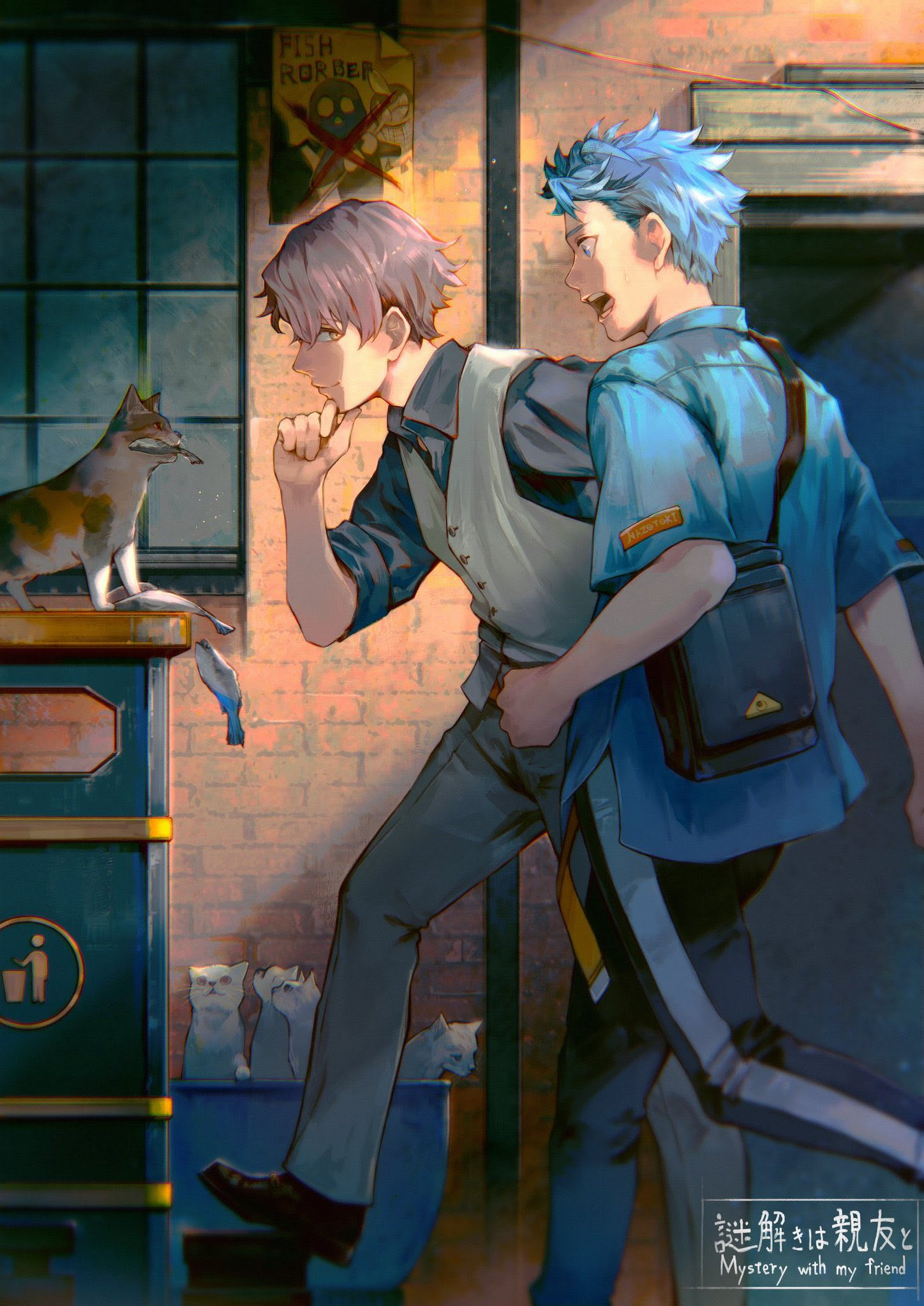 Mystery with my Friend is a visual novel application developed with the concept of enjoying your time with the mystery in the palm of your hands. Users can enjoy the mysteries of detective pairs with rich personalities.

Fascinating characters and heartwarming storiesThe app releases with stories that feature four pairs of detectives. Set amidst everyday school life, a private library, a café in a port town, and a London street corner, these heartwarming mystery novels follow detectives as they build friendships and discover themselves in the course of solving mysterious cases. The stories also explore the feelings of the people around them.

The app features stories written by talented writers such as the up-and-coming Saji Sasaki (aka Sasasa) who won the Readers’ Award in the Fourth Kadokawa Bunko Character Novel Awards and Higma, who has written screenplays for broadcast TV drama programs and mystery anime. The character designs are the creations of Michiru Burio, known for “Shinozaki-kun no Mente Jijou” (serialized by Kadokawa) and other works.

To enable readers to enjoy the story without any stress, we aimed to create a simple design by removing gachas, health, and as many elements that require time and effort as we could. All main stories are available for free, without any limit on re-reading them. An auto-bookmark function allows readers to read whenever they have time by automatically saving the place where they last left off.

Short side stories that accompany the main stories are provided as sub-stories. In addition, the “room system” allows users to customize rooms for characters who appear in the novel. Users can obtain items for rooms and use them to redecorate as well as customize the detectives’clothes and facial expressions. Users can also take screenshots of their favorite setups and share them on social media.

Sub-stories and room items are distributed as part of events and are also available for purchase in the in-app shop.

2. Plans for the future

Volumes 1 through 4 of each series of the main stories will be available for the release in August, and the final volumes will be released in September. Sub-stories and room items will be released for various seasons and anniversaries to add to readers’enjoyment of the stories, characters, and atmosphere.

As part of multi-language support, the English version of the app will be released simultaneously with the Japanese version. (Users can toggle between Japanese and English in the app). Additional languages will be added in the future.

While the detective partnerships feel like any mystery classic, the characters are modern and unique.

The Dessert Detectives: Nanami and Kon

A story of personal growth centered on Nanami, a serious honors student with a secret, and the tough-looking but kind Kon who dreams of becoming a pastry chef.

The Library Detectives: Sakaki and Miishi

The day-to-day life of Sakaki, a character from a unique detective novel from the early Showa period, and the gloomy Miishi, a librarian in a private library.

The Divine Detectives: Hinosuke and Chiaki

A heartwarming supernatural story focused on Chiaki, who runs a café in Yokohama, and Hinosuke, his housemate and a former god. It features many traditional spirits and monsters from Japanese folklore.

The Tailor Detectives Takuya and Louis

Set in London, the story follows the everyday lives of the easygoing Japanese exchange student Takuya and Louis, a talented and playful tailor.

The main stories are a series of long stories completed in volumes. All episodes can be read for free.

The sub-stories are shorter side stories of the main stories. They offer a wide variety of storylines set in the same world, such as the detectives’day-to-day lives, solving minor mysteries, stories focused on a supporting character, and crossovers with different detective pairs. Some sub-stories will be available for purchase.

Some stories focus on a supporting character, while others show a new side to the detectives.

In the room system, users can customize the detectives’outfits and rooms. Users can obtain room items and use them to place furniture, change backgrounds, customize detectives’ clothes and facial expressions, and more. They can also save favorite setups and share them via screenshots and to social media.

Some room items are distributed as part of events, and others are available for purchase in the in-app shop.

Furniture, sweets, pets, and more A wide variety of items are available for countless combinations

Some items are linked to certain sub-stories/The shop screen

Title : Mystery with my Friend